Unique habitat home to nightingale and turtle dove threatened by development of 24 Luxury houses
Conyer Brickworks, situated in the picturesque Conyer Creek, was dismantled in the 1980s and has since been left to re-wild, providing a unique habitat for a rich diversity of plant and animal life. Plant species, such as yellow wort, buddleia, sea-lavender and saltmarsh goosefoot; an array of butterfly species, including small tortoise shell, red admiral, common blue and meadow brown; as well as a variety of dragon and damsel flies. In addition, a number of bird species use the site for nesting and breeding. Species such as goldfinch, house martin, wren and linnet are all to be found here and if you are lucky you may catch a glimpse of the rare turtle dove or hear the song of a nightingale. As well as providing a home to this vast and diverse array of species, the site also provides a much needed leisure space for local residents who go there to walk, with or without dogs, engage in bird-watching or have a relaxing picnic with friends.

Unfortunately, the site is at risk of development due to the proposed building of 24 luxury homes. A large number of local residents have objected to the proposals. Here are five of the key objections that have been raised:

The site is home to 3 species of bird on the IUCN Red List of Endangered Species
The site is one of the few places where turtle doves, a species that has suffered a population decline in the UK of 94% since 1995, can be seen or heard.  It is also a key breeding site for nightingales whose population has declined by more than 90% in the last 50 years and whose numbers in the UK have dropped to below 5,500 pairs. Also present is the cuckoo whose numbers have dropped by 65% since the early 1980s. All three of these species are on the IUCN Red List of Endangered Species, giving them the highest conservation priority.

The proposed development contradicts Swale Borough Council’s motion to declare a climate and ecological emergency
Swale Borough Council proposed a motion to declare a climate and ecological emergency in 2019 in which they resolved to safeguard our wild places. The motion recognises the fact that many bird and wildflower species are suffering population declines and declares that loss of habitat and changes in land use are major causes of decline in Kent.  Given the uniqueness of the habitat in question and the variety of species present, some of which are extremely vulnerable, the development would further continue this trend. 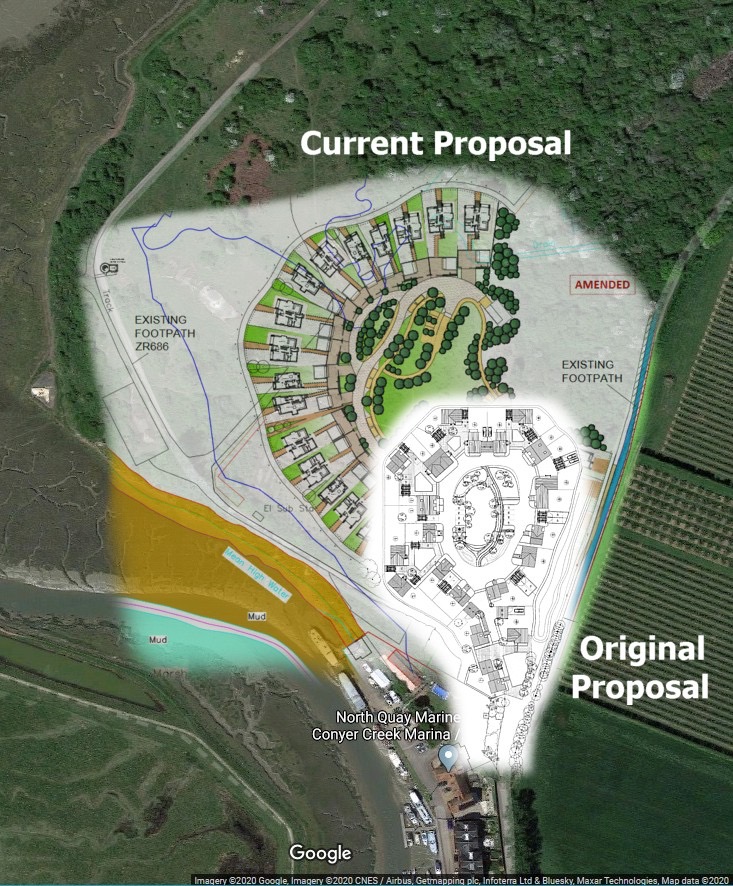 Planning permission was originally granted in 2011 but the area currently being proposed for development is significantly larger than that for which the permission was granted as can be seen from the photo alongside this article.

The development will increase pressure on already limited infrastructure
Conyer itself is only accessible by the long and narrow Conyer Road, while the entrance to the brickworks is reached via a road named The Quay which, due to the number of cars usually parked there, is effectively a single lane road.  Residents claim they are already experiencing delays due to a previous housing development bringing more cars to the area and an increase in delivery vehicles.

One of the Council's original grounds for refusing permission in 2010 was that "the area has poor access to jobs, shops, services and public transport” which means that local residents are heavily reliant on private vehicles. The proposed development would bring a large increase in the number of cars to the area and further increase the pressure on the already overloaded infrastructure.

The type of housing being proposed is not appropriate

Other objections focus on the size and appropriateness of the proposed development site with some referencing the Swale Borough Local Plan, adopted in July 2017, which sets out the vision and overall development strategy for the area. Some residents have pointed out that a proposal for 24 luxury houses does not meeting the demand for affordable housing, while others are concerned that the design of the houses are not in keeping with the village or the brickworks environment.

Want to find out more?

Head over to the Mid-Kent planning site by following the link below where you’ll be able to read the residents’ objections or lodge one of your own. Search for application no. 18/506460/FULL at https://pa.midkent.gov.uk/online-applications/